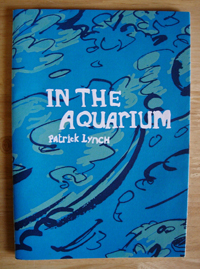 I recently finished a brand new mini comic – “In The Aquarium”. It’s a 16 page black and white affair with a fancy full colour dustcover. I’ve wanted to take a crack at doing a photocopied/hand made mini-comic to sell at conventions for a while now and this story seemed like a a nice self contained one that I could use for such a purpose.

“In The Aquarium” is based on the “Mr Fish” 24 hour comic I did in 2007. I always liked the story, taking inspiration from a meditative encounter in the Sydney Aquarium around January 2005 and my experience as a transient and expendable worker of various shit part time jobs over the years. Or something. I tweaked the setting and script a bit and drew it over the course of a few weeks last September/October. I’m pretty happy with the artwork in it, doing 16 pages in a relatively short space of time (for me anyway) brought a tighter consistency to the artwork than I felt was there in Last Bus. It’s more free form and open ended than anything I’ve yet published but it comes together after a perspective shift in the middle of the comic, I swear.

Between it’s debut at the “Thought Bubble” convention in Leeds, the Dublin City Comic Convention and the Independents Day fair in Newmarket, I’ve pretty much sold out the initial print run. I’ll keep it in print for the time being, you won’t see it in shops but you’ll be able to buy it from this site very soon and I’ll have copies with me at any conventions I attend.

The Comic Cast boys really loved the artwork if remaining puzzled by the story and Phil reckoned its my strongest work to date. So there you go. A worthwhile experiment in my books.