Alan Nolan recently nominated me to partake in The Writers Blog Tour. The idea is that everyone answers four seemingly innocuous questions about their work and process and then nominates several others to take up the baton. Here are my answers.

What am I working on?
After a period inactivity I’m happy to be back working on some comics, specifically ‘Stone Hewn Sky’ a story that has grown out of the comic I started in Frank Santoro’s Correspondence Course which I took last year. It started out about teenage runaways but now it’s evolved into a weird paranoid science fiction story, maybe a bit like Fight Club or Total Recall if they had been scripted by Franz Kafka. Who knows? That’s what I’m telling everyone at the moment! 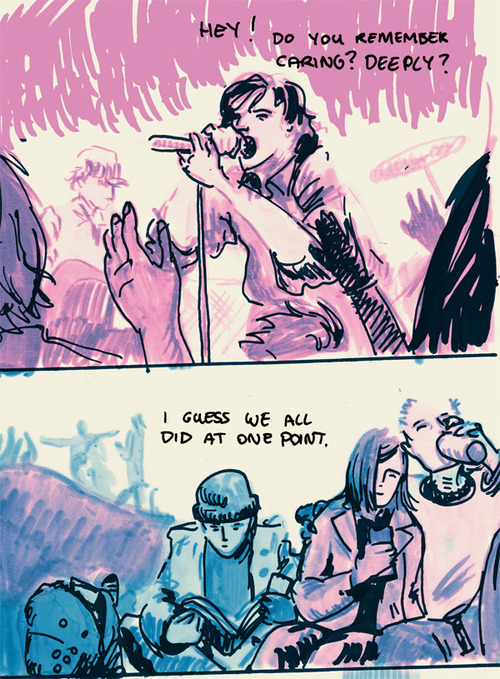 In addition to that there’s a series of very short comics I’ve begun contributing to Rabble magazine, called ‘We Speak in Code’ (another example above). I’m using these as a way of combining loosely related images and text. Keeping it open and letting the reader construct the narrative a bit more.

I’ve also just launched a Summer Subscription offer over on the ‘publishing’ house I co-run, Cardboard Press. I’m very excited to be publishing other artists and can’t wait to get the books into subscribers hands.

How does my work differ from others in my genre?
As everyone else seems to say, I don’t really know! I think that may be a question for readers of my work.

One of the great things about comics is that they’re a synthesis of both writing and drawing, but before you even get to the question of  the plots or stories, the reader is conveyed a huge amount of emotional information in the artist’s drawings. Because the artist’s personality is so wrapped up in the drawings, no matter what type of story is being told, the delivery is always going to be completely unique to that artist’s set of influences, strengths and weaknesses. Tom Hart calls this the ‘line-field’ and that makes a lot of sense to me. For someone who both writes and draws my own stories, this immediately makes my work look and feel different to anyone else’s.  Sometimes I think it makes the effect of reading comics almost like reading a prose book in the author’s own handwriting.

I was laughing with a fellow artist a while ago that my drawings have a certain ‘wobbly’ quality to them that I just can’t ever get away from. He remarked that this was probably a result of my ‘near painful sincerity’. I think he was only half joking – I don’t wrap my stories up in arch conceits or knowing pop culture references, I try and lay it all out bare on the table. There’s rarely a high concept which is probably why I have such a hard time coming up with ‘elevator pitch’ type synopses for my work. 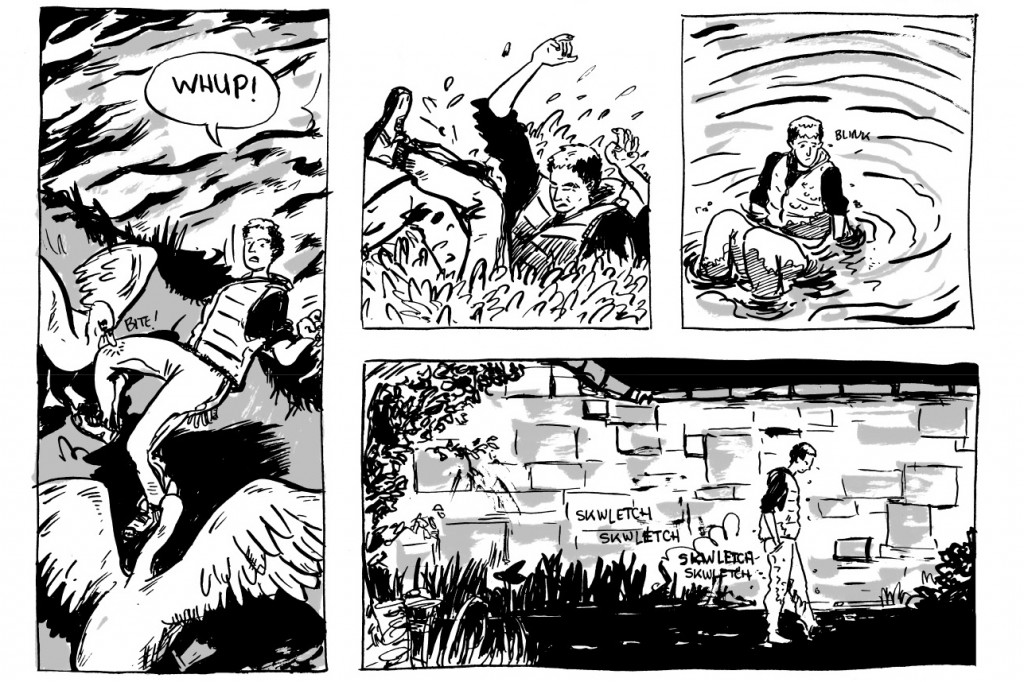 I also have a sneaking suspicion that most people don’t experience life in the bombastic overblown manner that a lot of comics present their narratives. I’m more interested in portraying a more subtle, nuanced type of story. Hopefully that makes my work relatable and humanistic.

Why do I write what I do?
I think we often are compelled to tell stories in order to try and make sense of our experiences of the world. A lot of the ideas behind my stories I might find hard to tease out in normal day to day conversations.

For example, with the story ‘Last Bus’, I was interested in exploring abstract ideas of societal structures, routine and authority. Questioning when would we step outside these set or expected roles or instead do they just bind us. I figured that a bus was a good microcosm of society. There are structures – you pay your fare, sit down and the bus takes you along a predetermined route to your destination, the bus driver is an authority figure of sorts –  but then, human nature being what it is, things don’t always go smoothly and these roles and structures are called into question. It’s an area like this that I find really interesting and a fertile ground  for my stories.

Constructing worlds/narratives/vignettes or whatever you want to call it to explore these ideas seems like a kind of natural thing to want to do.

How does my writing process work?

I’m still trying to figure this out. I think on a large scale I approach it like solving a puzzle but I also try and leave room for improvisation and

I always have a number of images, sequences or scenes that I carry around in my head for a long time, not knowing why they resonate so much. I write these down or sketch them out in my notebook and just let them percolate for a while. Often, I’ll have a scene or idea in my head for ages that doesn’t seem very spectacular but when I combine it with a different setting, or substitute a different character it takes on a whole new meaning and the story suddenly has life again. This is probably my favourite stage, everything feels vital and connected and full of possibility. 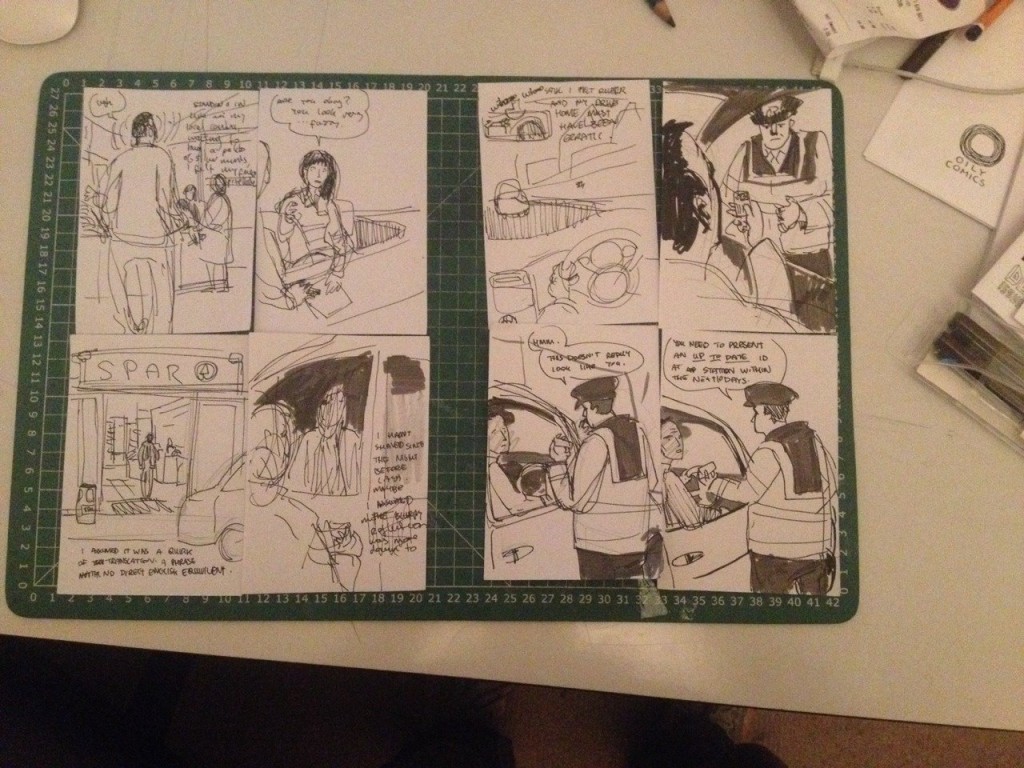 After that, it’s all honing.  It’s a matter of putting some structure on it, stitching together the scenes to form a narrative and drawing the damn thing, editing it etc!

Okay, that’s me done for the moment. Thanks again to Alan Nolan for the nomination. I hereby nominate the great Alan Ryan, Rory Mc Conville and Tommie Kelly for the next round.

Check it out. I teased the cover image to Stray Lines last week and now here’s the big announcement:

Cardboard Press (which is the small press publishing concern of Katie Blackwood and myself) is proud to announce that it will be publishing it’s first anthology, Stray Lines, featuring new work from Philip Barrett, Barry Hughes, Gus Hughes, Chris Judge & Andrew Judge, and Paddy Lynch.

Conceived as an opportunity to showcase some of Irelands most exciting and original indie comic creators together in a beautifully designed and produced publication, Stray Lines will make a handsome addition to any graphic novel collection as well as being a go-to source for new original Irish comic book talent.

I’m both super excited and incredibly nervous about this project as it’s the biggest and most ambitious project we have ever undertaken. The work from all the participants is absolutely top class and we can’t wait to share it with the world.

The cost factor is about 5 times larger than anything we’ve done previously and so we’re running a campaign to help finance the printing. I won’t go into all the details, but we’ve put together a whole range of rewards for every level of pledge, so maybe you could throw a few coppers into the pot.

Dark plots are hatched in  the corridors of power. Larkin is released from prison and delivers another of his rousing speeches, a particular quality for which he was well remembered (actual recital begins at about 1:03). I was rather pleased with this page, although in reflection the second panel will probably be redrawn before publication.

Only 12 pages to go on this project and I can begin to think about some new ones in earnest! Have a very special project lined up to see the light of day before the summer that I’m incedibly excited about, but it’s too early to spill the beans.

By the way, you’re keeping an eye on my Tumblr, right? Diary comics, and extra insights into the Big Jim working process are some of the many delights you might enjoy over there.

This week, I’m posting a couple of pages from a story that I was working on for an anthology submission to coincide with Design Week in Waterford. Link here. I missed the deadline in the end but will probably include the story in the next issue of Last Bus or another volume of Stop Gap. Still need to do the colours, some lettering touch ups and the title, but the guts of it is there. I tried a slightly simplified style for the drawing, inking purely with my new trusty brush pen. Anyway hope you enjoy it: